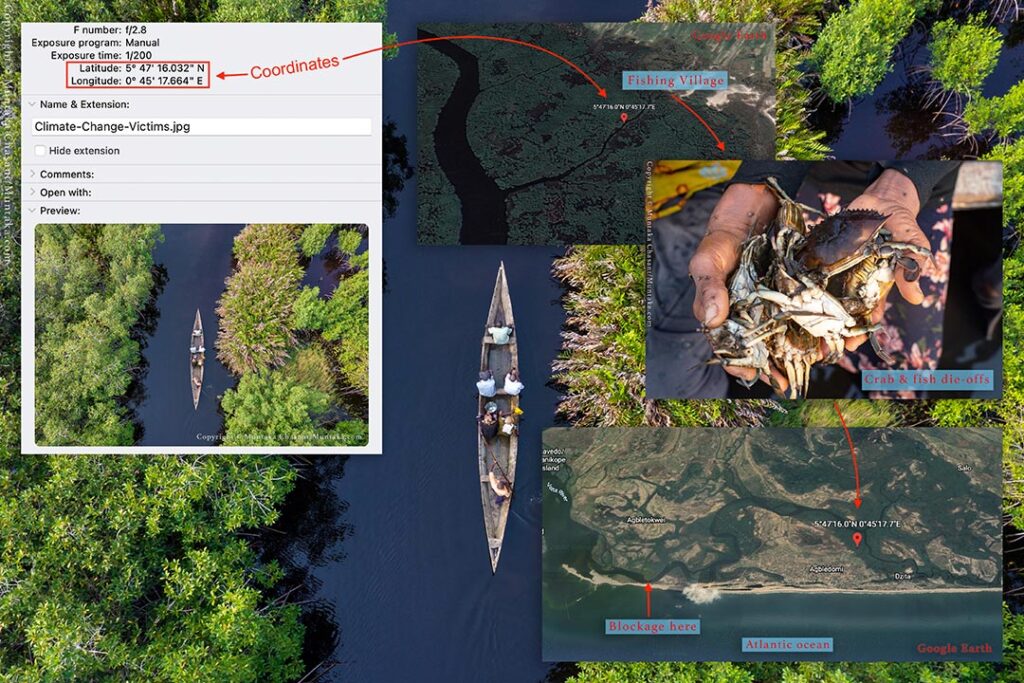 Victims of climate change are already here but shunned, left to fight their own battles. The future of towns and villages on Ghana's southeastern coast hangs in the balance in a time of climate crisis. A depressing reminder of how the rest of us should ready ourselves for the oncoming climate chaos.

Photo above: An illustration shows the impact of a strip of sandbar blockage on fisheries at Agbledomi, Southeast Ghana. Copyright © Muntaka Chasant

Victims of climate change are already here but shunned, left to fight their own battles. The future of towns and villages on Ghana's southeastern coast hangs in the balance in a time of climate crisis. A depressing reminder of how the rest of us should ready ourselves for the oncoming climate chaos.

A strip of sandbar — caused by tidal waves and huge storms that swept away homes and swallowed communities on Ghana’s southeastern coast in 2021 — blocks access to the Atlantic Ocean. The flooding and storm surges also ripped through the landscape, burying a community near the disappeared Fuveme, a fishing village that now only exists in memories.

The sandbar formed in a tidal channel in the Lower Volta — between Anyanui and Ada Foah, an important trading route for thousands of people. This now threatens the livelihoods of thousands of people who rely on the inlet and wetland fisheries as a source of jobs and food.

The locals have linked the blockage to crab and fish die-offs in the wetlands.

Anguishing and with no help from the Ghana Government, roughly 200 desperate rural men from different communities came together on 13 January 2022 to dig with shovels and bare hands. The attempt was to create an inlet through a swamp to reconnect the blocked stream to the tidal channel.

The photo above is a bland bird’s eye view of me on land. However, this stretch of land — a strip of sandbar — cannot be found on the map. Not on Google Earth.

Let’s work out the coordinates to see where Google Earth lands me.

According to Google Earth, I was in the middle of a meandering Lower Volta tidal channel (within the Volta delta).

That’s the channel that connects Anyanui and Ada Foah. However, Google Earth is flat wrong. The channel is now completely blocked by a strip of sandbar.

In contrast, I have pinned my location on 13 January 2022 in the aerial image below:

Below are some zoom outs of Google Earth rendering of the coordinates.

Observation: The shoreline in the Google Earth screenshots appears crooked.

Until around mid-2021, and worsened by the early November 2021 tidal waves and flooding, the Google Earth rendering of this channel was somehow accurate, the locals told me.

With the channel blocked, communities and wetlands that rely on the ebb and flow of the Atlantic tides are under stress.

Dead crabs and fish are now starting to float in the water.

Communities from Anyanui to Anloga and beyond rely on the Lower Volta as a source of jobs and food security. Unable to flow into the Gulf of Guinea, fisheries around the region are collapsing.

Crabs and Fish Die-offs Kilometers Away

To see the impact of the blockage, I visited a small section of Agbledomi, one of the affected communities (roughly 8 km away).

Here, fishermen showed me dead crabs and fish that were floating on the surface of the water. Fishermen around Agbledomi later participated in the communal labour down the coast.

So far, no help has come from anywhere — not from the Ghana Government.

These desperate men want their lives back — so badly that the 68-year-old Keki Hagba below left his family to come and help.

“I don’t remember us having to go through something like this in my lifetime,” distressed Keki Hagba, 68, said. “At my age, I wouldn’t be here if I had any choice. The blockage is literally choking us. No one will help us. Why, who have we wronged?”

It was agonizing and heart-wrenching, yet one of the most persevering scenes I have seen in the course of my coverage of communities on the frontlines of the climate crisis.

I hope you remember these men when you think of the victims of climate change.

The situation has not improved significantly in the last 10 months. Ghana Government has still not sent any help.

The small and shallow inlet they created allows for a small canoe passage, but not without struggles against the flow of river water from upstream.

Above, an artisanal fishing crew returning from the Gulf of Guinea tried fruitlessly to make their way through the inlet against a strong flow of water from upstream. Some of them had to come out on the banks to pull it with rope.

Shocked, I tracked down the fishing crew — with the help of an Assembly Member — to Dzaflagbe, a village nearby.

Prosper, 52, was the lead fisherman. He and his family temporarily relocated to Dzaflagbe after surging tides swept away the rest of Fuveme 6 years ago.

For prosper, the sandbar blockage evoked struggles and memories of the past — of Fuveme, his birthplace that’s now buried under the Atlantic. “There’s pain…yet I still have fond memories of Fuveme…my home, where my children, dad, and I were born,” Prosper said to me while looking down at the floor.

But Dzaflagbe itself was not spared.

Homes were abandoned following tidal waves and storms that swept away portions of the village.

Worse, a barrier island has recently extended to the middle of the mouth of the Volta River, the longest river in Ghana.

What’s Going on at the Volta River Estuary?

That’s me on the edge of the extended barrier island on 7 November 2022. However, this narrow stretch of land cannot be found on Google Maps.

According to Google Earth (here), I was standing (red location icon) in the heart of the Volta River estuary. Again, Google Earth is wrong, as the photos above clearly show me standing on a sandy stretch of land.

This has implications for streamflow upstream.

I spend significant resources and time traveling to these geographies to tell stories like this. The rest is now up to the Government.

For advocacy, I spoke to the media on this (after the Nov. visit), and it ended up on the front page of the Ghanaian Times here (21 Nov. 2022). Keeping my fingers crossed that this now attracts some attention.