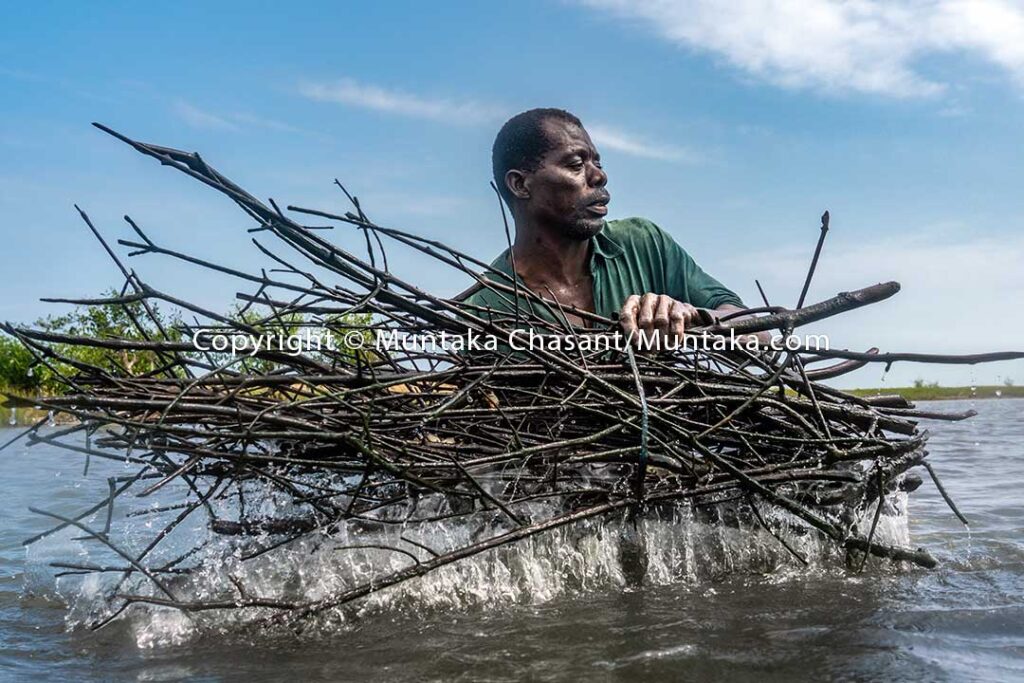 Fisheries and Mangroves in Ghana: Atidza and the Densu Delta Ecosystems

Tidal river fishermen have degraded the mangrove forest cover around the Densu Delta — a Ramsar-designated wetland — for traditional fish traps. Only about 16 red mangrove trees (Rhizophora species) are left standing, having all been cut down for the traps, fuelwood, and timber. However, mangrove biomass is critical for fish assemblages, which the fishers rely on. This habitat degradation has led to a loss of biodiversity in the area, leading to a decline in fish stocks in the Densu intertidal zone. The video below explores this problem.

Tidal river fishermen have degraded the mangrove forest cover around the Densu Delta — a Ramsar-designated wetland — for traditional fish traps. Only about 16 red mangrove trees (Rhizophora species) are left standing, having all been cut down for the traps, fuelwood, and timber. However, mangrove biomass is critical for fish assemblages, which the fishers rely on. This habitat degradation has led to a loss of biodiversity in the area, leading to a decline in fish stocks in the Densu intertidal zone. The video below explores this problem.

A much tougher environment for plants. However, mangrove forests have appeared in nearshore landscapes where indigenous people did not plant them — to keep watch.

We did not understand them very well in the past. Now we do.

Adapted to harsh environments on the edge of tropical and subtropical seas, mangroves are an important link between land and ocean.

However, these critical habitats are disappearing at an alarming rate in the tropics, including in Ghana.

We have lost more than a quarter of global mangrove forests in the past 50 years, says a NASA report1.

Having degraded the mangrove habitats around the Densu Delta, tidal fishermen are now catching fewer fish, a tell-tale sign of unsustainable exploitation.

The video below explores the impacts of unregulated fisheries and the overexploitation of a coastal ecosystem — a deltaic wetland in Accra, the capital of Ghana.

Having degraded the mangrove habitats around the Densu Delta, tidal fishermen are now catching fewer fish, a tell-tale sign of unsustainable exploitation.

It’s a short story about the changing environment and how it is reshaping the livelihoods of the people who rely on the Densu Delta as a source of jobs and food.

There are now only about 16 red mangrove trees (Rhizophora species) left around the Densu Delta, a Ramsar-designated wetland. There were thousands of them in the past. The video below explains why:

Total mangrove area in Ghana covers around 137 km², according to a 2007 UNEP report3.

Mangroves in Ghana are mostly found in nearshore lagoons and estuarine environments — mainly around the Volta Delta and along the western coastline between Ivory Coast and Cape Three Points. This includes the Greater Amanzule Wetlands and Akwidaa (about 7 km from Cape Three Points).

A Ramsar designated site, the Densu Delta in Accra was once home to red mangrove colonies — just like some parts of the southwest and southeast Ghana. There are now only around 16 Rhizophora species left standing — having all been cut down for fish traps, lumber, and fuelwood.

The remaining scattered stands of Avicennia germinans (Black Mangrove) around the Densu Delta are also under threat.

The degradation around the Densu Delta — the main focus of this post — stands in stark contrast to the trends in other mangrove-colonized areas of Ghana as some of the images above collaborate.

No Fish to Catch, Fisherman is Going into Commercial Driving After 25 years of Fishing

We have cut them [mangrove trees] all down — for fish traps and fuelwood.

“There were many red mangrove trees around here,” said David Kpaligah, a fisherman in the Densu Delta. “They are all gone now. We have cut them all down — for fish traps and fuelwood.”

David has an everyday experience with mangrove trees. He has been fishing around the Densu River since 1995.

But there are now no more fish for him to catch.

Compared with marine fisheries, Ghana’s collapsing inland fisheries have received little to no attention at all.

“The environment has changed. I now want to stop fishing and become a commercial driver because there’s nothing left for me to catch,” David added, with a hint of regret in his voice.

At almost 50 years of age and after 25 years of fishing, David wants to start taking driving lessons — to take care of his family of 10 children, 4 grandchildren, and a wife.

David is indeed aware (as you can see in the video) of the key role, for instance, red mangroves play in fish assemblages.

Cutting down mangrove trees seems to have been a mainstay of the area’s economy dating back to the early 80s.

According to David, red mangroves colonized the Densu Delta area before Ghana’s 1983 famine4 5.

People trooped in from nearby areas, including Tsokomey, Bortianor, and Faanaa, to cut down the red mangrove trees for fuelwood during the famine.

Cutting down the black mangrove trees (Avicennia germinans) intensified from 2012 after a different group of people claimed ‘ownership’ of some parts of the area, David told me.

The 80s famine period was probably the golden age of cutting down mangrove trees around the Densu Delta.

What Are The Ecological Benefits of Mangrove Trees?

Mangroves are transitional ecosystems, especially near the Densu Delta, where freshwater, land, and the ocean meet.

Mangroves ensure the sustainability of coastal ecosystems. For instance, many fish species around the Densu Delta rely on mangrove biomass for productivity.

Support for wildlife — including monkeys, crocodiles, migrating songbirds, and many shorebirds species.

Mangroves serve as breeding and nursery habitats for many fish species, including blackchin tilapia, grey snapper, mosquito fish, and leatherjacket fish6 7. Many fish species and crustaceans rely on mangrove ecosystems.

The Densu Delta intertidal area hosts a large population of reed cormorants. Also known as long-tailed cormorants, they spend their time diving and swimming underwater with their webbed feet to snatch fish for a meal.

Degradation and habitat loss from the cutting down of mangrove trees put pressure on bird species around the delta.

As a source of jobs and food. Populations living near the coast depend on mangroves for their livelihoods. Some harvest them for house construction. Others use and sell them for fuel, and their antibacterial8 properties.

As seen on this page, mangroves also help the fishers construct brush parks. The urban poor also rely on fish from these artificial habitats as a source of jobs and food.

Provide coastal protection. You may not even know it, but mangroves could be protecting your property from flooding if you live near the coast.

Mangroves play important roles in defending coastlines against erosions9 by trapping sediments. They reduce risks from strong winds, wave attacks, and also act as a buffer against storm surges10.

Carbon sequestration. As natural carbon sinks, mangroves sequester carbon dioxide from the atmosphere and store it in their biomass over long periods.11They do this even more effectively than tropical rainforests12. This helps to mitigate the impacts of climate change.

Despite the many ecological benefits, these trees are being degraded at an alarming rate around the Densu Delta. The red mangroves are gone. Those are out of the question.

The remaining scattered black mangrove stands are also under threat.

These photographs below were within 5 minutes part.

Turned around a few minutes later and saw this:

The Densu Delta fishers are indeed aware of the key roles of mangroves in fish assemblages. David explained the traditional perception of the processes in the video above, which is pretty much what the science says.

Why do they still harvest them?

Why Do Coastal Populations Still Cut Down the Incredibly Important Mangrove Trees?

Densu Delta’s intertidal habitats support livelihoods and provide essential food, including blackchin tilapia, blue crabs, and oysters. They also serve as spawning grounds and nurseries for a wide variety of species. Mangroves play an important role in this.

Despite its support for fish assemblages, mangroves in the area have been decimated in recent years for Atidza brush parks.

You probably saw the environmental footprints of the Atidza method of fishing [in Ghana] in the video.

Atidza around the Densu River involves sinking mangrove brush bundles to the bottom of the water to create artificial habitats. Blackchin tilapia takes refuge in the shelters, form schools, and spawn there. They also serve as nursery habitats for juvenile fish. The fish populations thinking they are safe, the fishermen wait several weeks before harvesting them.

They use a net to surround the shelter and gradually remove the submerged branches and debris until the net is drawn together to entrap the fish.

A new habitat is rebuilt simultaneously with the old mangrove bundles.

This method of fishing is practiced in many parts of West Africa — including in Benin and Nigeria.

I have filmed the Atidza process in the video above.

Is Atidza a Sustainable Practice?

Atidza supports countless livelihoods, yes, but it is clearly not a sustainable practice around the Densu Delta.

Overfishing has led to a decline in fish catches around the Delta. As a result, a lot of the fishermen are having to expand by creating more Atidza traps.

The longer the wait, the more fish are caught, but they cannot wait several weeks to harvest one trap. Having a few of these traps means they can harvest one or two every week.

David alone has nine of these traps.

This frustration has led to the fishers regularly cutting down the mangrove trees to use them for the Atidza traps.

This method of fishing also put pressure on fish populations in the area, including pre-spawning fish.

Sea level rise and the Weija Reservoir spillage have resulted in significant saltmarsh biomass loss around the Densu Delta.

Vast swaths of the deltaic marshes in the area have drowned and transforming into tidal flats.

Tides are coming farther inland. As you saw in the video, ocean tides now cover the lower marsh areas — squeezing the rest against drier land.

Home for several species, they are disappearing along with the life systems they support.

There probably wouldn’t be much left of the marshes by the end of the decade.

What is the way forward?

The trends documented in this post are having a serious impact on fish assemblages, distribution, and abundance of mangroves around the Densu Delta.

Restoring these coastal wetlands and mangroves would require sustained efforts and commitments.

It would also require engaging the populations who rely on these ecosystems as a source of jobs — by integrating them into management and conservation efforts.

In the video, David has admitted that they are the architects of their own doom.

My role in this is limited to documenting these emerging human-environment interactions.