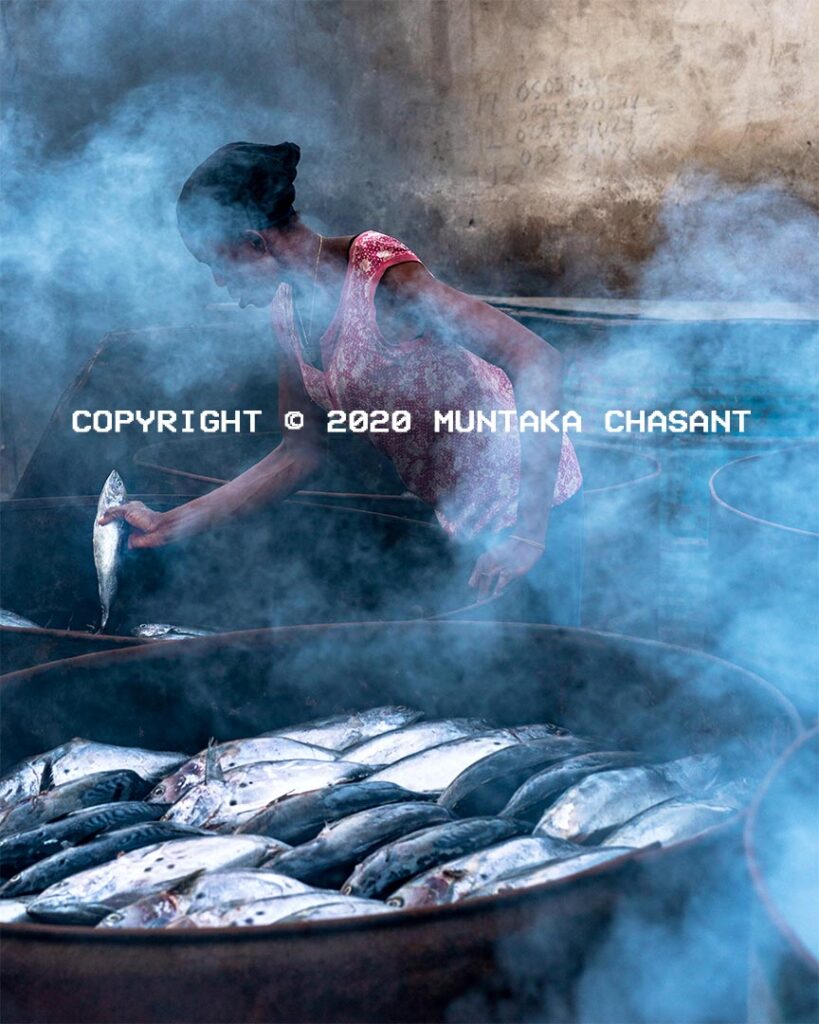 Fish Processing in Ghana: Trade-offs Between Livelihoods and Health risks

Fish processors in Ghana trade-off between their livelihoods and exposure to cancer-causing toxicants, including PAHs. Climate-related shocks and overfishing are reshaping the mobility of migrant fishers.

Fish processors in Ghana trade-off between their livelihoods and exposure to cancer-causing toxicants, including PAHs. Climate-related shocks and overfishing are reshaping the mobility of migrant fishers.

Collapsing fish stocks due to overfishing, destructive fishing methods, and climate-related shocks are reshaping patterns of migration and framing livelihoods and mobilities along the coastlines of Accra, the capital of Ghana.

Migrating in the direction in which fish stocks are moving is a way for fishers to secure their livelihoods1. However, harsh urban conditions in a city such as Accra are threatening these migratory patterns.

Over 2 million people in Ghana rely on the fisheries sector for their livelihoods.2

Around 500,000 are engaged in processing and distribution, with a large number of them having to migrate to other parts of Ghana due to declining fish catch in their native towns and villages.

Cecilia Ntifful, 27 years old, is a fish smoker at Jamestown in Accra.

She had migrated to Accra due to a fall in fish catch around her hometown Anomabo — a town roughly 50 km east of Cape Coast, the capital of the Central Region of Ghana.

A large number of women had migrated from the Central Region to the Jamestown area in response to the movements of fish.

Yet, in Accra, these fish processors who provide Ghanaians with important animal protein sources (around 60% in the average Ghanaian diet) sleep in the open at night without roofs over their heads — hiding behind plastic sheets during rainfall events.

That is how they live from year to year — moving between Jamestown and Agbogbloshie market and Makola — feeding the city’s poor and wealthy, and sleeping by the Gulf of Guinea out under the stars at night.

“It’s demeaning to sleep in the open, not to mention the risks we face outside at night,” Cecilia responded when I asked about their accommodation situation. Her eyes welled up with tears and added: “I only know how to smoke fish. I wish there’s something else for me, and I wouldn’t have to be in this situation.”

The entire area was razed down in late May 2020 to make way for a fishing habour — further worsening their situation.

The wooden shacks around the Jamestown lighthouse couldn’t accommodate the fish smokers from Central Region because they were already occupied by the native fishing community.

Proximity to fish landing sites and urban markets are critical for their livelihoods.

Jamestown, for instance, is within a short walking distance to large markets, including Agbogbloshie and Makola.

Ghana is a heavy fish-consuming nation, with an estimated annual consumption requirement of around 720,000 metric tonnes.4

The fisheries sector accounts for 4.5% of the country’s Gross Domestic Product.5 The women on this page contribute significantly to this.

But the role they play in Ghana’s food production systems is underestimated and unappreciated.

And roofs over their heads remain a distant dream.

Why Do They Migrate?

Climate-sensitive livelihoods are forcing indigenous people to migrate to cities to participate in the urban economy.

The changing environment — declining harvests and fish stocks — put their source of income at risk.

With limited livelihood options, they move to cities to seek fisheries-related opportunities in expanding urban markets.

But urban areas in many developing cities are unplanned and clogged, which force internal migrants into informal settlements that are often hotspots of hazard exposure.

Forced to migrate due to climate shocks and reckless human activities, they settle on the fringes of cities, in slums and squatters, from where they stage their centuries-old vocation that feeds thousands of people across the demographic spectrum.

But they face serious health risks.

What Health Risks Do Fish Smokers in Ghana Face?

Vulnerabilities in informal settlement communities and occupational hazards posed to the urban poor in their working environment have received very little media attention in Ghana.

Generally (the fisheries sector), the men go out to sea as fishermen, while the women remain on the coast to receive the catch, prepare, smoke, and market the fish.

Smoked fish is a vital animal protein source in Ghana, especially for urban households under the pressures of food insecurity.

But the method of smoking fish (e.g. using metal drum kiln) in Ghana exposes both the fish smokers and consumers to dangerous levels of polycyclic aromatic hydrocarbons (PAHs), harmful compounds found mainly in the wood smoke.

The traditional methods of smoking fish in Ghana results in high levels of PAHs in food8, which researchers fear may be compromising public health9.

According to the Food and Agricultural Organization of the United Nations (FAO), smoked fish prepared using firewood in Ghana exposes consumers to cancer risks10.

PAHs11 are carcinogenic to humans, and are known to contaminate traditionally-smoked fish in Ghana12.

PAHs exposure occurs through skin contact, inhalation, and food routes. Ghana’s fish processors breathe in smoke from the fire and eat their own fish. Their skin also naturally comes in contact with the smoke.

According to a statement from the International Association of Fish Inspectors on the safety of smoked fishery products13, consumers of smoked fish in West Africa are on average (from fish only) exposed to a key marker in PAH called benzopyrene — 32 nanograms/kilogram (ng/kg) body weight per day compared to the European Union (EU) average of 3-4 ng/kg body weight/day.

As a result, many countries within the EU regularly reject smoked fish from Africa due to the high levels of PAHs in them.

In other words, fish smoked this way is not considered a safe food.

Studies have linked exposure to PAHs to ocular conditions, lung cancer risks, and other diseases.14 15 16

The continued use of traditional kilns to process the most important animal protein in Ghana presents adverse impacts on food safety, nutrition, public health, livelihoods and economic development in the country.

According to FAO estimates, over 70% of fish landings in Ghana are processed using chorkor smoker or the metal drum kiln, adding that, “the continued use of traditional kilns to process the most important animal protein in Ghana presents adverse impacts on food safety, nutrition, public health, livelihoods and economic development in the country.”

Despite consistent research findings, there appears to be very little public education on the health risks associated with PAHs exposure in many Ghanaian communities.

For the thousands of women engaged in fish smoking in Ghana, economic uncertainty trumps all health and environmental risks. They cannot avoid the everyday hazards as it has become an intrinsic part of their livelihood and survival strategy.

There’s a glimmer of hope, however.

The FAO-Thiaroye processing technique17 is helping to minimize this exposure.

But do the fish smokers earn enough to be able to afford them?

The mobile phone snapshots below — from 2014 and 2015 — capture the Jamestown fish landing scene.

The scene below broke my heart in 2015 and still breaks my heart now.

Urban Poverty: Looking To The Future

Around 90% of Ghana’s employed population 15 years and older in 201518 were in the informal sector, with women making up nearly 55%.

Men and women in the informal sector do so much for Ghana’s economy, yet receive very little reward.

Unless equitable pathways are developed to ensure sustainable development across all areas, the rapidly expanding urban environment will continue to attract young people from the hinterlands. In cities, they would be forced into informal works, where there are minimal protective precautions against exposure to occupational hazards.

With respect to urban poverty responses, interventions to improve livelihoods at community or households levels are always not effective because public sector agencies frequently assume that informal settlements are the only places the urban poor lives. But poor people live everywhere in Accra, for instance.

Poor people are usually viewed as passive. At the receiving end of economic assistance, they frequently have no say or control over how the help they receive is managed. They only have to ‘shut up’ and extend their hands.

Area-based interventions have failed to improve the lives of the urban poor, especially those who do not live in informal settlements.

Instead, city-wide actions would allow resources to reach a greater number of people in distress who would otherwise be excluded.