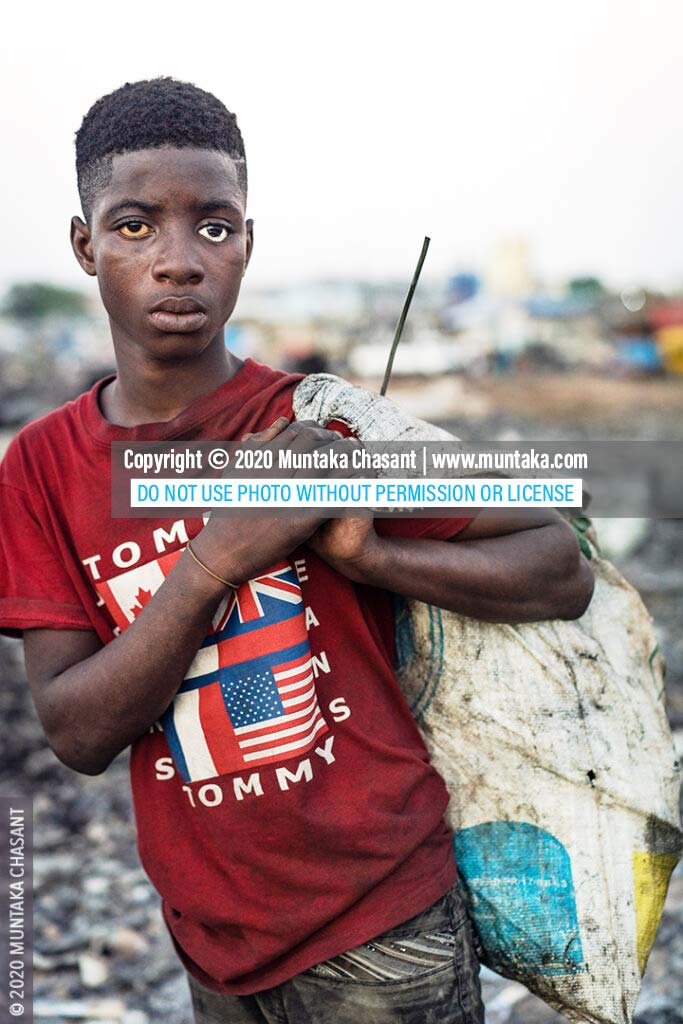 In a rich and fruitful land, Babes reduced to misery, And their fields are bleak and bare william blake Kwaku Debrah is an economically vulnerable adolescent boy who spends his days scavenging and cannibalizing from discarded e-waste on the fringes of Agbogbloshie, Ghana. A sharp long African broomstick fired from a slingshot punctured his eyeball […]

Poverty in Africa: Kwaku Debrah is a 15-year-old adolescent boy engaged in hazardous child labour on the margins of Accra, Ghana’s capital city. Wearing a prosthetic eye on the left side, he spends his days cannibalizing from e-waste on the margins of Agbogbloshie as a livelihood strategy. Around 385 million children worldwide live in extreme poverty and survives on less than $2 a day, UNICEF estimates show. © 2020 Muntaka Chasant

In a rich and fruitful land, Babes reduced to misery, And their fields are bleak and bare william blake Kwaku Debrah is an economically vulnerable adolescent boy who spends his days scavenging and cannibalizing from discarded e-waste on the fringes of Agbogbloshie, Ghana. A sharp long African broomstick fired from a slingshot punctured his eyeball […]

In a rich and fruitful land, Babes reduced to misery, And their fields are bleak and bare

Kwaku Debrah is an economically vulnerable adolescent boy who spends his days scavenging and cannibalizing from discarded e-waste on the fringes of Agbogbloshie, Ghana.

A sharp long African broomstick fired from a slingshot punctured his eyeball when he was 9 years old. Deeply stuck into his cornea, he immediately pulled out the stick. “The doctor said I shouldn’t have pulled it out,” Debrah once told me.

He is now blind in the left eye and wears a prosthetic.

Sequestered on the fringes of society, Debrah and several other children, some as young as 7 years old, spend every day of their waking life in the toxic shadow of Agbogbloshie, an area renowned for its heavy metals pollution.

What Does Debrah Do?

He scavenges for scrap metals and wades through mounds of discarded goods for precious components on the margins of Agbogbloshie. This exposes him to heavy metals such as lead, mercury, cadmium, nickel, and chromium.

Food, clothes, and the expectations for the children to contribute to their household economy seem to be the main driving factors.

From a female-headed household, Debrah’s mother had escaped poverty in their rural hometown to Accra in search of economic opportunities. But things are far worse in the nearby Sodom and Gomorrah slum where they live. With rampant poverty, the Old Fadama slum area is often seen as unfit for human habitation.

Many urban poor moved to cities and towns, not as a response to urban labour demand, but to escape hunger and poverty in rural hinterlands.

Long under-estimated, urban poverty is pushing many female-headed households to force their children to become providers. This is driving the incidence of child labour in cities.

I have documented this problem in the articles below. See more details and photos:

I was near Agbogbloshie and decided to stop by to check up on the boys. I turned around and immediately spotted Debrah trudging up from the banks of the Korle Lagoon in the dark (after 6 PM), with a sack behind him. A very poignant scene of adolescent poverty.

Quickly pulled out my camera and grabbed some shots of him coming in against a backdrop of the heavily polluted Korle Lagoon and a section of the Agbogbloshie scrapyard.

Had a faster prime (Zeiss FE 55mm f/1.8) in the bag, so quickly switched to get a little more light into the sensor. I managed to grab the portraits below before Debrah headed out to weigh and sell his treasures.

These photographs are only a small window on the life of Debrah.

Documenting people and situations in real-time in hazardous environments is no easy, but I hope to be able to bring you more of Debrah as his life unravels in the coming months.

I will be happy to respond to your comment below.

All photos & text on Muntaka.com are copyrighted. Do not copy or reuse without permission.
×
Loading Comments...
We use cookies to ensure that we give you the best experience on our website. If you continue to use this site we will assume that you are happy with it.Ok