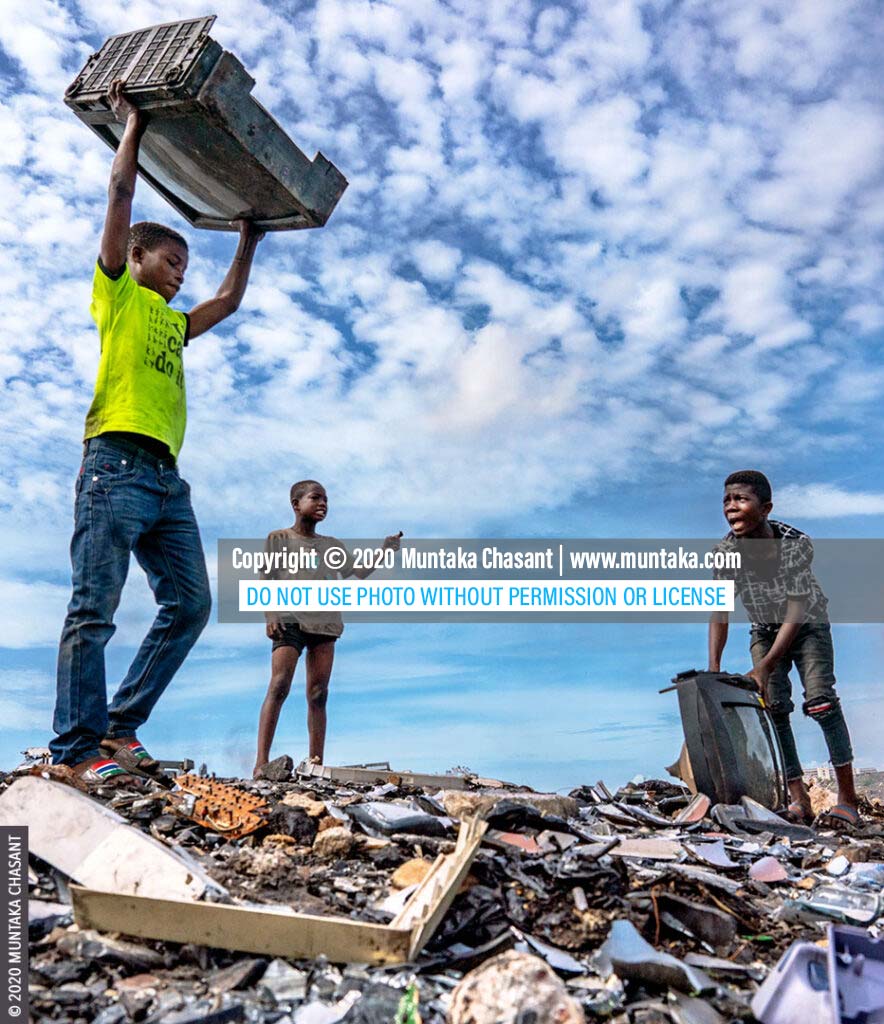 Photography’s impact on society and culture is ubiquitous. Visual images have shaped public and foreign policy for centuries — creating an unrivaled role in transforming human societies in ways we cannot even imagine. Lewis Hine’s work inspired legislation that cut down the number of children engaged in child labour in the United States at the […]

Child labour image: 14-year-old Bright Ankrah (left) is about to smash an old CRT TV against a rock to retrieve the shadow mask and other iron materials inside at Agbogbloshie, Ghana. Osei (right), 15, is shouting at Bright: "be careful I'm here! be careful!!" Roughly around 31.5 million children in Africa are in hazardous child labour, according to the International Labour Organization (ILO) estimates. © 2020 Muntaka Chasant

Photography’s impact on society and culture is ubiquitous. Visual images have shaped public and foreign policy for centuries — creating an unrivaled role in transforming human societies in ways we cannot even imagine. Lewis Hine’s work inspired legislation that cut down the number of children engaged in child labour in the United States at the […]

Photography’s impact on society and culture is ubiquitous.

Visual images have shaped public and foreign policy for centuries — creating an unrivaled role in transforming human societies in ways we cannot even imagine.

Lewis Hine’s work1 inspired legislation that cut down the number of children engaged in child labour in the United States at the dawn of the 20th century.

The Red Cross conducted one of its biggest relief operations since World War II in 1992 after James Natchway’s Famine in Somalia 2 published.

I have been documenting hazardous child labour at Agbogbloshie for some time now.

My hope is that this body of work will bring this situation to the forefront.

Hopefully, these children get some help before it is all too late.

See the links below for details and more photographs.

Informal disposal and recycling of end-of-life electronics (e-waste ) may be poisoning a generation of young people living on the margins of Accra, Ghana’s capital city.

The photographs on this page are only a small window on their lives.

For food, clothes, and the expectation to contribute to their household economy, Osei and the other children use their bare hands to cannibalize from discarded e-waste and sift through the soil using fingers — to retrieve small pieces of metals — in an area renowned for its heavy metals pollution.

They are exposed to toxic materials such as lead, mercury, cadmium, and barium.

A study in 2013 found lead levels as high as 18,125 parts per million (ppm) in one of the soil samples collected from around Agbogbloshie.4 US EPA’s recommended safe limits for lead in bare soil in children’s play areas is 400 (parts per million) ppm and 1200 ppm for non-play areas.5

The Basel Action Network and the International Pollutants Elimination Network also found the highest levels of brominated and chlorinated dioxins ever measured in free-range chicken eggs in Agbogbloshie in a 2019 study6, fearing this may be contaminating Ghana’s food chain.

The children engaged in hazardous child labour on this page are part of thousands of people who toil in the toxic environment at Agbogbloshie every day trying to salvage precious metals from the waste stream.

Kristen Grant and other researchers in a 2013 study published in The Lancet Global Health7 examined — 23 epidemiological studies — the association between exposure to e-waste and health outcomes from 1965 to 2012 in southeast China. They found credible outcomes associated with exposure to e-waste including reduced lung function, changes in cellular expression and function, stillbirths, miscarriage, and evidence of greater DNA damage compared to a control group.

What is Going on in The Photographs?

There’s no doubt that some e-waste is still making its way into Ghana, with some ending up at a place such as Agbogbloshie. But a significant chunk of the e-waste that goes into Agbogbloshie is locally generated.

For me, where the e-waste is generated and where and how it is recycled is absolutely important. Not so much for where it was made. We can make the same argument for cars, leather shoes, and toothbrushes.

The Basel Convention allows for repair and reuse. A sizable number of the e-waste that makes their way into Ghana are repaired and reused. Not all Ghanaian households — with roughly around $2200 GDP per capita — can afford brand new LG LED TVs.

For instance, some of the end-of-life cathode-ray tube (CRT) TVs and computer monitors on this page had been in Ghana for decades. They had been used by local households and businesses and had added value to the local economy before being cannibalized for parts at Agbogbloshie.

Itinerant collectors pay a small fee for them from households and repair shops throughout Ghana. The collectors sell their goods to scrap dealers inside the Agbogbloshie scrapyard and other places.

For the old CRT TVs, the interior parts are “urban mined” for valuable components such as circuit boards and wiring.

The lead-filled CRT funnel glasses part are then discarded on a nearby e-waste dump or left around for the children to pick up. These glasses are a waste for the scrap dealers. But for the urban poor children around Agbogbloshie, the iron materials inside are a major source of instant cash.

These once symbols of high-quality engineering are smashed against stones and repeatedly hit with rocks for the shadow mask, aperture grille (Sony Trinitron), and other precious metals inside.

CRTs from old TVs and computer screens contain high levels of toxic materials such as lead1, barium, and cadmium (in the phosphors)2 3, and are known to pose risks to human health and the environment.

CRT funnel glass contains around 22% of lead by weight4 5. Their recycling is heavily regulated in many countries, including the US6, where several States prohibit their disposal in municipal waste landfills.7

The photographs below show in series how smashing the CRT TVs against a rock could instantly reveal the iron materials inside.

Let’s zoom in to see what happened at the moment of impact.

They hit the panel glass with stones directly if smashing the CRT TV against a rock fails.

Then use different techniques to remove the rest of the glass.

When a glass appears too tough, an experienced person steps in to help.

What Happens After All of This?

It’s now time to weigh and sell. But first, let’s see what they got.

Time To Weigh And Sell

There’s a selling point just nearby, so it’s now time to see how they managed.

How much did Mustafa and Osei weigh? Let’s zoom in.

Yes, that’s all they got for the risk and exposure to lead and other heavy metals.

But Osei and Mustafa are happy. The $1.7 should get them some food and new sets of clothes. They might even keep a change for their urban poor parents.

Here’s a puzzle for you:

Where do you think they are headed?

The Place of Urban Poor Children in Society

We are all in a tussle, but the urban poor are more torn apart by the system.

Sequestered on the fringes, urban poor children face severe exclusion and misery. Not even basic services such as safe water, adequate sanitation, and health care reach them.

For me, the situation of the children on this page is not because of something that happened to them or their poor parents, but the consequence of the society in which they live. Perhaps my unfinished poem at the beginning of this page captures this.

I will be happy to answer your questions below.