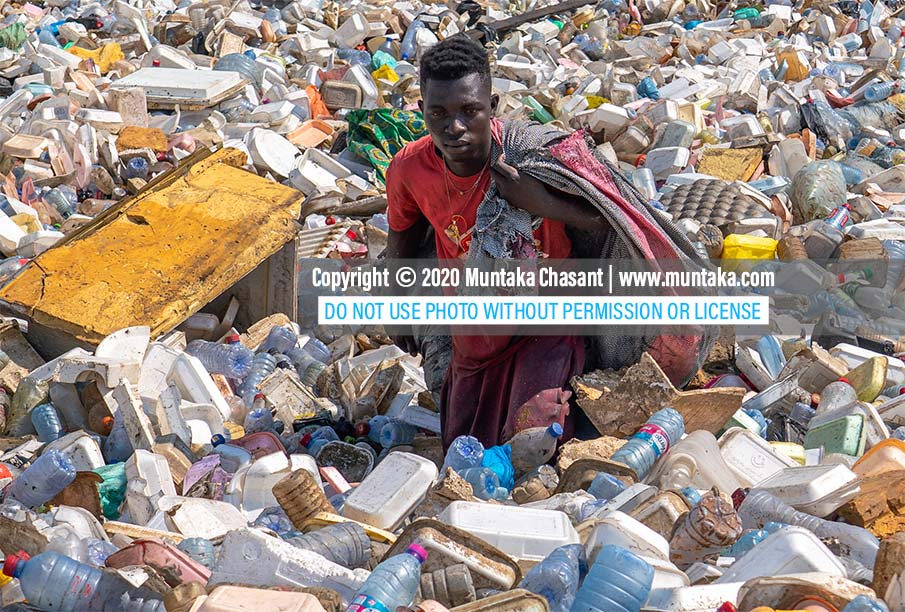 Africa has one of the world’s poorest youth populations. The photographs below are only a small glimpse into how a 25-year-old urban poor Ghanaian man is determined to survive in Accra's harsh urban environment.

Poverty in Africa image: Living in a harsh urban environment, Kwabena Akese, 25 years, makes a living by risking injury to swim in the polluted Korle Lagoon in Accra, Ghana, to collect plastic waste, which he sells for pennies. Around 80 million young people in Africa live in extreme poverty, according to a World Data Lab report. More than 860 thousand young people in Ghana between 15 and 34 years are unemployed. Copyright © 2020 Muntaka Chasant

Africa has one of the world’s poorest youth populations. The photographs below are only a small glimpse into how a 25-year-old urban poor Ghanaian man is determined to survive in Accra's harsh urban environment.

Africa is home to one of the world’s poorest youth populations, with around 80 million1 living in extreme poverty.

The man below, Kwabena Akese, is a 25-year-old urban poor who spends some of his days swimming in the heavily polluted Korle Lagoon near the center of Accra to recover recyclable plastics, which he sells to recyclers for pennies.

This video should get you started before you scroll down:

Young people are routinely not recognized as a resource in many developing countries. As such, their absence in decision making is clearly visible in a region such as Sub-Saharan Africa.

Africa, a largely gerontocratic society, had the highest labour force participation of older persons in the world in 2015, according to the United Nations Populations Division2.

Many cannot afford to stop working out of fear of old-age poverty — despite reaching pensionable age. This also means that millions of Africa’s youth are out of jobs because their fathers and grandfathers have ‘refused’ to stop working to make way for them.

Africa’s youth bulge is projected to grow in the foreseeable future.

As the last frontier in the fight against extreme poverty, Africa’s youth bulge is projected to grow in the foreseeable future.

No doubt millions of young people would be forced to engage in hazardous work — such as Kwabena below — as cities creak under a load of their growing populations.

Read more about this situation and Kwabena here:

All photos & text on Muntaka.com are copyrighted. Do not copy or reuse without permission.