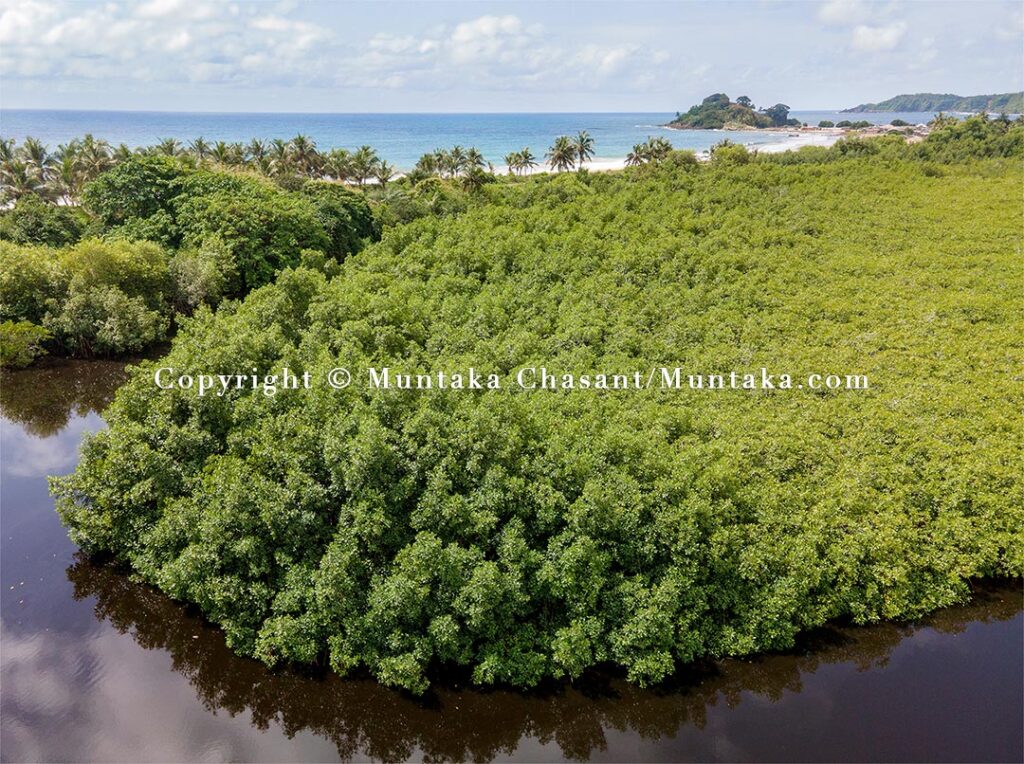 Ghana has a rich and diverse natural heritage — including coastal wetlands that support thousands of livelihoods. However, human actions have degraded a significant chunk of them.

This project viewed Ghana’s landscapes as part of a past-present-future continuum by visually comparing urban and non-urban landscapes.

The landscapes captured in the photographs below contain remnants of the past and portents of the future.

Photo above: Aerial view of a thriving mangrove forest in the Ezile Lagoon at Akwidaa, the most populous southernmost human settlement in Ghana. I captured this during a study that compared mangrove biomass in southwestern Ghana with degradations in other parts of Ghana, including the Densu Delta — a Ramsar designated wetland in Accra, Ghana’s capital city. Only around 16 red mangrove trees are left standing around the Densu Delta now — having all been cut down for “Atidza” fish traps, lumber, and fuelwood. Akwidaa and Accra are over 250 km apart.

Photo above: Aerial view of the environmental footprint of “Atidza” brush parks in the Densu Delta Lagoon in Accra. This method of fishing involves cutting down mangrove trees and sinking the branches to the muddy bottom of the brackish water to form artificial habitats. This provides a nursery environment for many fish species, including blackchin tilapia (Sarotherodon melanotheron). The artificial habitat serves as a sanctuary — a spawning and feeding shelter — for mainly the lagoon tilapia around the Densu Delta lagoon.

This method of fishing has contributed to the loss of biodiversity around the Densu Delta lagoon.

The Densu Delta is one of the only 6 Ramsar1 designated wetlands in Ghana (as of 2020).

There were thousands of red mangrove trees around the Delta in the past. There are now only around 16 trees left standing — all cut down for the “Atidza” fish traps, fuelwood, and timber.

The overexploitation of the mangrove trees around the Densu Delta has led to a decline in fish assemblages — worsening livelihood and the food security situations of the people who rely on fisheries resources from the area.

Photo above: A dark cloud gathers over the Densu Delta Lagoon in Accra, with Western reef herons wandering near the shore.

The Densu Delta area was once home to thousands of red mangrove species. They have all been cut down for fish traps (“Atidza” brush parks), fuelwood, and lumber.

Mangroves are known to support rich biodiversity, including serving as a home for many wildlife.

Photo above: Black herons, Western reef herons, Little egrets, Great egrets, and other bird species hang out on and near one of the last 16 remaining red mangrove (Rhizophora species) trees left around the Densu Delta — a Ramsar designated deltaic wetland in Accra.

Red mangrove forests once colonized the Densu Delta area. There are now only around 16 red mangrove trees left standing around the wetland — having all been cut down for “Atidza” fish traps, fuelwood, and lumber.

Degrading the mangrove forest around the Densu Delta has resulted in a permanent loss of habitats for wildlife — including the displacement of many bird species who regarded the mangrove trees as home.

Photo above: A healthy mangrove forest in the Amanzule Lagoon in southwestern Ghana — roughly around 300 km away from Accra, the capital city.

In contrast, check out the Korle Lagoon below:

Photo above: Plastic waste in the Korle Lagoon — near the center of Accra, the capital city. A 25 years old urban poor man swims in it to collect recyclable plastics. Accra’s drainage channels empty their waste — including plastics — into the ocean through the Korle Lagoon.

Compared with the Ezile Lagoon and the Amanzule Lagoon above, the plastic waste in the Korle lagoon — about 1 km away from the Atlantic Ocean — is clear evidence of the impact of unsustainable urbanization on nearshore environments.

Photos above: The Korle Lagoon2 is recognized as one of the most polluted water bodies on earth.

A 28 years old man swims in it to recover recyclable plastics and cans. Named Eliah Kodom, he had migrated to Accra from Nkoranza (near the center of Ghana) in search of economic opportunities. This is what he told me in Twi, a local dialect:

This was a tough scene for me.

Photo above: A thriving wetland in southwestern Ghana.

Photo above: Locally known as “Apeadja,” these dying trees were once popular and intensively felled for lumber around Nzema, southwestern Ghana. Overexploited — they are rare around the area now. They remain standing in the wetlands around Nzema as a reminder of the past. I captured this as part of research on Ghana’s unexplored woodlands and wetlands.

The Cost of So-called Developing Cities

Encouraging poorly planned developments over large amounts of land without much consideration for the environment is clearly not very smart.

Photo above: Aerial view of the polluted River Ankobrah — from many years of illegal gold mining (“Galamsey”). Just to be clear — I captured this scene in late January 2021.

I would love to read your thoughts on the theme in this post in the comments below.