Ghana Has The Second Dirtiest Air In Africa – Report

Air Pollution in Ghana. Accra was blanketed in dust-laden winds from the Sahara Desert in early 2020. © 2020 Muntaka Chasant

The report is based on available data.

Ghana’s dirty air was only slightly better — by less than 2 points — than that of DR Congo, the worst in Africa.

Air pollution levels in Ghana in 2019 were worse than those in Uganda2, Nigeria3, and Angola.

Air pollution is a major risk factor for premature death in Ghana.

More than 28,000 people die from air pollution in Ghana every year, according to the World Health Organization (WHO).

Roughly around 7 million people die prematurely from air pollution worldwide every year, the WHO estimates show. Mainly from diseases such as stroke, lung cancer, heart disease, and respiratory infections, including pneumonia.

Particulate matter (PM2.5) pollution kills more people worldwide than wars, malaria, HIV/AIDS, and smoking, according to a new study from the European Society of Cardiology. The research was published in the journal Cardiovascular Research4 in March 2020.

Other recent studies have linked air pollution to increased risk for miscarriage5, up to 3.4 million preterm births6, mental illness7, brain cells damage8, cognitive impairment in children9, and a ‘huge’ reduction in intelligence10.

See other latest air pollution research findings at the bottom of this page.

What Are The Causes of Air Pollution in Ghana?

Ambient air pollution in Ghana is characterized by natural and anthropogenic sources.

Climate variability, rapid urbanization, and trends in population growth in urban areas are having a tremendous impact on air quality in Ghana.

Major sources of outdoor air pollution in Ghana include:

According to the State of Global Air Report 201911, more than 70% of people in Ghana use solid fuels such as charcoal and wood to cook food in open fires and inefficient cookstoves.

Check out this Crucial Article & Documentary 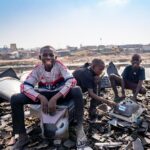 See hazardous child labour at Agbogbloshie and a missing child found through this article.

How Does IQAir Collects Data?

IQAir AirVisual uses data collected from ground-based monitoring stations that measure levels of PM2.5, ultrafine particles of 2.5 micrometers or less in diameter, which are known to pose serious risks to human health.

The data are collected from government monitoring stations as well as validated monitors operated by private individuals and organizations.

The report did not include measurements for gaseous air pollutants such as sulfur dioxide, carbon monoxide, and ground-level ozone.

According to the IQAir AirVisual’s 2019 World Air Quality Report, Ghana averaged PM2.5 concentration of 30.3 micrograms per cubic metre (µg/m3) during the period of the study. This exceeds the WHO recommended annual guideline of 10 µg/m3.

Ghana’s annual mean concentrations of PM2.5 in 2016 was 31.1 µg/m3, more than 3 times above the safe limits recommended by the WHO.

See the WHO most recent global air pollution database here.

The World Bank widget above — with some missing data values — shows Ghana’s PM2.5 mean annual exposure between 1990 and 2017. The annual mean concentrations of 35 µg/m3 (2017) above is 3 times above the safe limits recommended by the WHO.

The Iranian city of Zabol near the border with Afghanistan was rated the most polluted city (PM2.5) in the world in 2016 by the WHO.

Which Countries Had The Most And Least Polluted Air in The World?

Finland, Iceland, U.S. Virgin Islands, and the Bahamas recorded the lowest PM2.5 pollution in the world.

Which Regional Capital Cities Had The Dirtiest Air According To The Report?

Next to Kinshasa, the latest report ranked Accra the second regional capital city with the worst air pollution in Africa.

Delhi, India’s capital city, and Dhaka, Bangladesh’s capital, were respectively rated as having the worst air pollution among all regional capital cities in the world.

Cities With The Worst Air Pollution in The World

Six of the world’s top 10 cities with the worst air pollution were in India.

Below are IQAir AirVisual’s 2019 World Air Quality Report’s 13 cities with the worst air pollution in the world:

Nigeria’s northern city of Kano13 had the dirtiest air in Africa in the 2018 report.

Air quality monitoring data were lacking in many developing regions, particularly in Africa and South America.

Many countries in Africa do not measure the air they breathe.

Data on outdoor PM2.5 was only available for 8 of 47 countries in the WHO African Region for the latest Global Ambient Air Quality Database (2018).

There were only 4 installed IQAir monitors in Ghana, all in the Greater Accra Region. The monitors were installed by private individuals and organizations.

“The participation of many groups and citizens who operate their own air quality monitors and have made this data publicly available, has increased data coverage significantly. If it were not for these valuable contributions, there would be no publicly available data in Angola, the Bahamas, Cambodia, DR Congo, Egypt, Ghana, Latvia, Nigeria, Syria, and Ukraine, ” the report acknowledged.

The participation of many groups and citizens who operate their own air quality monitors and have made this data publicly available, has increased data coverage significantly. If it were not for these valuable contributions, there would be no publicly available data in Angola, the Bahamas, Cambodia, DR Congo, Egypt, Ghana, Latvia, Nigeria, Syria, and Ukraine.

Ghana’s EPA does some air quality monitoring — only in some parts of the Greater Accra Region — but their data are not publicly accessible.

Ghana’s EPA does not issue air pollution alerts even when poor air quality is expected to impact health.

How would you tackle Ghana’s dirty air problems? Leave your comment below.

All photos & text on Muntaka.com are copyrighted. Do not copy or reuse without permission.
%d bloggers like this:
We use cookies to ensure that we give you the best experience on our website. If you continue to use this site we will assume that you are happy with it.Ok